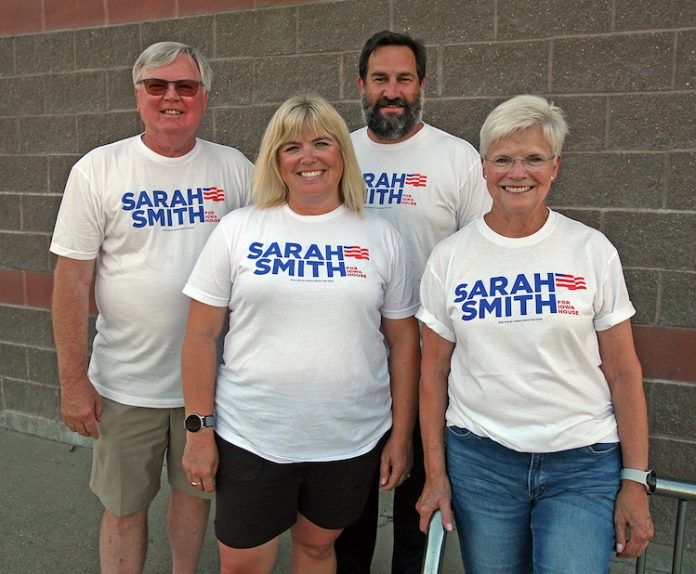 Pictured are, from left: Paul Pohlson, his daughter, Sarah Smith, her husband, Dustin, and Paul’s wife, Debby Pohlson. The Pohlson and Smith families have been active in business, community service, theater and arts in the Grinnell community and area for 40 plus years.

Paul Pohlson and his wife, Debby, were living in the Quad Cities at the time and Pohlson was running Head Start Preschool programs on the Iowa side of the two-state area.

“It was a social work program and I didn’t make a lot of money,” recalled Pohlson. “My wife and I decided to make a move to be closer to family.”

The couple, who met at the now closed Ottumwa Heights College, had been in the Quad Cities for about 10 years, moving there after getting married.

They considered Ottumwa, Pohlson’s hometown, but settled on Grinnell where Debby grew up and had family.

They loaded the moving van and headed west.

At the time, Sarah, the couple’s daughter, was in preschool and she remembers riding in the front seat of the moving van with her dad.

“She was right up there next to me,” Pohlson said.

The couple also has a son, Scott, who lives in Vermillion, S.D. where he works as the University of South Dakota Dean of Enrollment and Admission.

Once they settled into Grinnell, Pohlson had an opportunity to get a job in the insurance business.

“And here we are,” he said of still working in the insurance and financial arena 40 plus years later. He’s also remained active in community service in the Grinnell area through the years along with all of his family.

Sarah attended Grinnell High School where she swam for the Tigers. After graduating from GHS in 1994, she landed at Luther College in Decorah, where she swam and sang in the Norse choir. She went on to earn degrees in psychology and biology, graduating in 1998.

It was at Luther that she met her husband, Dustin, a native of Rock Island, Ill.

The couple met in the catering department at the college.

“We were scheduled to wash dishes together many nights and that did it, over dishes,” said Sarah with a light chuckle and smile.

“I cracked eggs and Dustin made omelets,” she said.

Dustin and Sarah married in 1999 and moved to Chicago for jobs. Sarah worked at Lincoln National Insurance Company and Dustin was a financial advisor for Thrivent Financial for Lutherans. They spent eight years there before coming home to Grinnell in 2006.

They have two children, Alex, who will be a freshman at Luther this fall where he will play baseball for the Norse, and Josie, who will be a sophomore at GHS in the fall.

Sarah said she and Dustin are quite proud of their children. They were both on the swim team at GHS and Dustin played baseball for the Tigers.

This fall, Sarah said, Alex and the Norse will play a baseball game against the Briar Cliff Chargers on the original Field of Dreams Movie Set in Dyersville. The game is slated for Sept. 16.

“We are so excited for him,” she said.

And Sarah remains involved in coaching the GHS girls’ swim team, where she will have a chance this fall to work with her daughter and the rest of the team.

“She spends her fall with her mom,” said Sarah of coaching Josie.

This fall will mark her 11th year at the high school and 15th overall as a swim coach.

In addition to her work with the swim team, Sarah spent a number of years as a volunteer board member on the Grinnell Newburg Community School Foundation.

“Now, I am content to just be involved,” she said.

Sarah currently works at Grinnell College as the Director of Outreach Programming and Events.

“I connect campus and community through events and programming,” she said.

She also remains active on the Dollars for Scholars Board and helps youth get a head start in college or trade school. And she is in her seventh year serving on the Unity Point Health – GRMC board of Trustees.

In addition to her community service, Sarah is running for House District 53 on the Democratic ticket in November.

When asked what led her to seek a political office, Sarah said some years ago while in the Poweshiek County Leadership Program, she spent a day at the State Capitol and got the bug.

“I felt inspired to run someday,” she said.

She returned home to Grinnell and let the Poweshiek County Democrats know that she was interested in running someday.

That someday came a little sooner than later.

She said in 2019, Rachel Bly, who had run for office, encouraged her to consider running. She reached out to the state Democratic Party and it went from there.

“After coffees and phone calls with the House Truman Fund (a political funding arm of the Iowa Democratic Party), the now minority leader, Jennifer Confrst, encouraged me to run in 2020,” she said.

After losing to Dave Maxwell that year, who she said is a great man, Sarah opted to run again. She will face Dean Fisher, a Tama County Republican, on the November ticket.

Pohlson is involved alongside Sarah on the Dollars for Scholars Board. He also serves on the Iowa Valley Community College Board of Directors and said proudly, “I was involved in building the new Drake Community Library.”

“What a great place for the Grinnell community,” he added.

Debby is also active in the community arts and history, having just directed Frozen Jr. She has been in other community plays and in past years played Peter Pan.

“She presently serves on the Grinnell Historical Museum Board and has done many musical shows with a group called, Shults and Company,” said Pohlson.

Debby is currently the chair of the Unity Point Health – GRMC Foundation Board.

In addition, the family attends St. Paul’s Episcopal Church in Grinnell where at one time or another, they have severed on the church leadership board.

When asked about the importance of serving the community, Sarah thinks we need more opportunities to get together and listen to each other.

“It’s important give back to the community and be a part of the community through involvement,” added Dustin, who spends his weekdays at Cirks Agency in Grinnell, a company that specializes in insurance and financial services.

And Pohlson, who is seeking a seat on the Poweshiek County Board of Supervisors, currently works for the Truax Agency, an insurance agency based in Parkersburg, and also as a consultant for True North Agency in Cedar Rapids. He said people have been good to him in business and he has enjoyed spending time listening to the needs of people in the Grinnell community.

“It’s time to give back and to continue to listen to people,” he said.